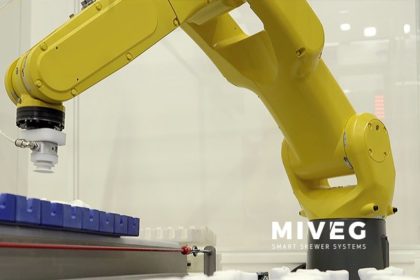 The use of robots in the meat processing industry will increase significantly in the next few years. There are many reasons for this, robotics and automation are above all a response to the challenges in the skilled worker sector.

Robotics and automation as an answer to the challenges.
The cooperation between human and machine is necessary for production of grill skewers. In the future, however, more and more tasks should be taken over by robots, and staff should be saved. Robot systems are supposed to accelerate and simplify work processes in the grill skewer production. The ideal: manual movements are no longer necessary, trivial tasks are taken over by computer-controlled robots. 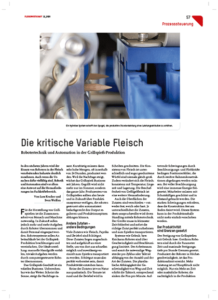 Full automation with maximum performance in grill skewer production. Is that possible?
The skewer business is a volatile business. As unpredictable as the weather. When the sun is shining, demand rises rapidly. In the short term, very large quantities then have to be produced, often within 24 hours. There is also something else: demand is increasing, the skewer business has been growing for years. Grilling is no longer just in summer, but all year round.

Producers of barbecue skewers must have production systems today and in the future that are robot-controlled or automated to regulate the output as required and to intercept production peaks.

Many ingredients are in bulk.
Ingredients such as meat, peppers, onions are bulk goods. This means that these ingredients are heaped cut to size in one place so that they can be transported to the skewer as quickly and reliably as possible. Bulk goods must be perfectly prepared so that productivity can arise.

Meat. The critical variable.
No ingredient grows squarely. Meat is different in consistency, cut into cubes, the sizes are never the same. The consistency changes with temperature, lying time and storage. If it lies too long, it becomes almost a homogeneous mass.

Other ingredients. Other conditions.
The texture of poultry is another challenge. And the tomato, it’s round. The surfaces of ingredients are also different: either firm, soft or hard. The more different the ingredients, the more demanding the absorption by robotic technology. The gripper has to pick up the right ingredient perfectly in the shortest possible time without errors and transport it to the skewering. 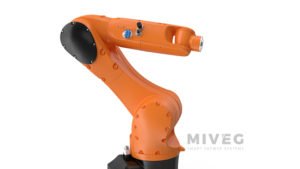 Space and time set limits.
Systems such as articulated robots or articulated arm robots are limited by speed and acceleration. The working area and thus the necessary distance per cycle depends on the number and type of ingredients. Due to the physical dependence of the speed on distance and time, the cycle time increases. This will reduce the pics per minute.

Vibrations caused by acceleration and centrifugal forces cause positioning errors that have to be absorbed by stiffer frame structures.

Immense energy is released at full acceleration. Employees must be protected with protective cages and kept at a distance. Strong vibrations require that the structure is firmly fixed to the floor. This system can no longer simply be moved in the production hall.

Limits of productivity.
There are limits to the production of grill skewers with articulated or gripping arm robots: time and maximum production depth per hour. If the robot produces at top speed, the production limit has been reached. More power is not possible at the push of a button.

Output can only be increased with more time or additional robots that are subsequently integrated into production. 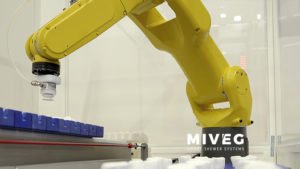 Test installation for checking the productivity of robot systems. MIVEG has been researching robot-controlled skewer production since 2016.

Not scalable at peak times.
Production peaks often mean a multiplication of the production volume in the same delivery time. This is why a production line made up of robots that is too small quickly reaches its limits. A large number of robots have to be used in order to be able to consistently deliver high quantities quickly and flexibly at peak times.

Skewer production.
With robot-controlled skewers, the skewer is fixed to the handle. The entire stick, in particular the end of the stick, is thus exposed to high forces. The risk of kinking or veering increases significantly at the clamping point. At high processing speeds, the susceptibility to errors increases significantly: bent wooden skewers are poorly fitted and wood breakage occurs.

Saving employees with robot technology in the production of skewers.
One of the most powerful arguments in favor of robotics is the saving of personnel costs. The aim is to simplify production workflows and processes in order to avoid simple, risky and exhausting activities for employees. This is largely achieved through robotics, but also through automation. But: The more demanding a new system is integrated into the company, the more demanding the handling and operation become. The result: savings in manpower for simple activities, but higher personnel costs when operating new, complex systems.

Fallacy of simplification through robot technology.
» The cost of implementing a robot in a production environment is five times greater than the cost of the robot alone «. (Quote Dr. Torsten Becker, article vdi-z, 29.10.20)

For the integration of a robot-controlled skewer technology into your own production environment, additional investments in visual systems, safety devices, protective fences, gripper technology and programming and much more are necessary. In addition, it takes a lot of time and patience to plan, integrate and commission such technologies.

Conlusion.
Scalable productivity in grill skewer production reaches its limits with robot technology. Technologies are required that compensate for these disadvantages in order to offer high-performance systems for maximum performance and simultaneous personnel savings. 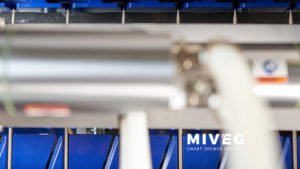 A hybrid system from MIVEG, i.e. a fusion of conventional technology and robot technology, manages the balancing act. The Skewer Systems 4080 and 7200 are variable in their timing. You can increase the productive hourly output to the maximum output at the push of a button, without any loss of performance.

Work steps and processes that were previously time-consuming and labor-intensive can largely be replaced or saved with new, smart modules. These systems are very easy to use and control.

2. „Rightsizing“ in skewer production.
Rightsizing means the perfect adaptation of your production technology to your needs as a grill skewer producer. This means that the system to be used offers sufficient performance for all requirements – both during normal production cycles and at peak times. With the clear intention of making effective profit.

3. Classifying the production processes.
In order to achieve the greatest possible efficiency and profitability with the help of robot technology and automation, we classify the manufacturing process of the grill skewer production into three modules.

Step 1: Module drop-in-place.
The collection and transfer of the various ingredients from bulk goods must be highly efficient at all times. This process must work as quickly as possible and be automated, without restriction, functional, robust and simple.

The capacity for receiving and transferring the ingredients is the first critical bottleneck for a scalable and maximizable production output. If the drop-in-place area reaches its performance limit due to integrated gripper arm robot technology, an immediate increase in output is not possible.

A process-controlled vibratory conveyor transports bulk goods such as meat, cheese or fish in a structured manner to a skewer automation. It distributes the pieces of meat in the shortest possible time in the correct position for inclusion in a cassette. A shuttle belt is used for shaped products such as minced meat or meat substitute products, without any loss of performance or quality.

In this production process, employees can optionally equip the cassettes with additional toppings such as peppers and onions. The speed of performance can be maintained and even increased.

Step 2: Module patented automated skewer technology.
For maximum output in all production conditions, the grill skewer must be uncompromisingly of the highest quality and with the highest efficiency. Each skewer must be guided through the middle of the ingredients and components without putting any strain on the wooden skewer. This is made possible by a patented high-speed skewer system from MIVEG. With this patented skewer technology, an output of over 97% is guaranteed, even at full speed. 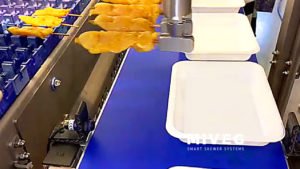 The MIVEG gantry robot takes the finished grill skewers from the skewer handle and places them in the sales packaging.

Step 3: Module Pick and Place, gantry robot.
A gantry robot removes the finished skewers from the handle and places them either in sales packaging or on a conveyor belt. With the attachment on the handle, the end of the stick remains clean and attractive. The appearance and purity are not impaired or contaminated with marinade. The handle does not need to be cleaned automatically, and nothing catches fire on the grill that quickly.

With the help of the gantry robot, the orientation of the skewers is maintained. When placed in trays, they stay clean. The number of items and the desired placement orientation of the grill skewers can be selected according to customer specifications – whether lengthways or crossways, it does not matter. And: The skewers are precisely positioned to a tenth of a millimeter.

Do you have any questions? Meet us. 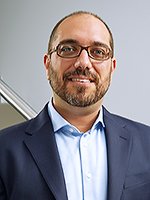 Lars Kracker is managing partner of MIVEG GmbH.
His expertise and passion for barbecue skewer production have flowed into the development of skewer systems and customer consulting for over 25 years. 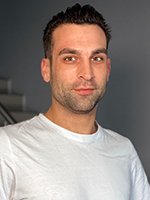 Sven Weißen is a development engineer at MIVEG. Based on his know-how in automation and robotics, the economical hybrid solutions are developed at MIVEG.

What you can read next 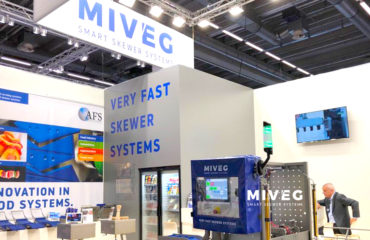 Skewer System 4080: Automated skewer system for up to 5 million skewers per season. 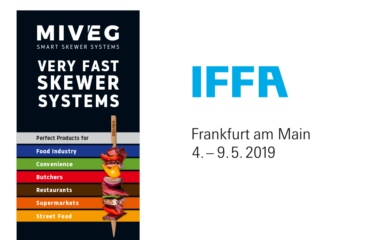 MIVEG at IFFA ´19.
The gleaning for the fair. 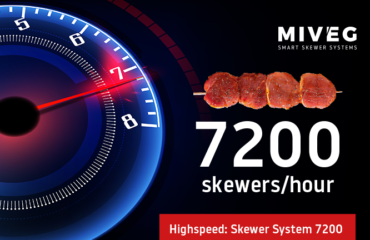